The improvements to ‘Clary Loan’ has been a joint venture with East Lothian Council, Walker Homes, and Ormiston West TRA.
First, a little background on the path known locally as the ‘Clarty Loan’:
This path has been called ‘Clarty Loan’ as far back as anyone can remember. My family have been in the village for over 100 years, and that has always been the name. I remember asking my parents why was it called that, and they said ‘no one knew’. It was used by coal miners on their way to and from work; four coal mines surrounded the village at that time, so that may be the link.
It is still on maps satnav as Park Rd.
With the new builds all to the north of the village, Ormiston West TRA suggested that upgrading the path would be of great benefit to the local community and the area. Ormiston West TRA approached Walker Homes for some help and they agreed to fund the reinstatement of the path; they also agreed to pay ELC to do so. Ormiston West TRA also raised the issue of lighting along the ‘Clarty Loan’ with the Local Housing Partnership (ELC), and they agreed to fund the lighting needed to make a safe walkway. This would be a huge advantage to the community as it is a short cut to the local shop, parks and school with no traffic, so safe for the kids. Now all the agreed work has been done and it looks fantastic.
We can all achieve so much by working together.....


***
​NOTICE BOARD
The group has approached East Lothian Council for a notice board,
where they can share information with those, who don’t have an access to a computer.
You can now find it at the bottom of Park Road, right next to the shop.
***
At the moment, all issues in relation to the paths roads OWTRA was working on are being held up by the virus. ​The group is still checking round the village for fly tipping.

'Ormiston West TRA have been helping the most vulnerable in their community by doing shopping, cooking meals and contacting tenants and residents by phone to maintain communication, and ensure that they have everything they may need.
​Mark Ormiston, Chair of the group, has been collecting wood for those that still have coal fires and helping to keep the stock piles up.

We are focussed on finding new ways to contact people that have no access to a computer and/or social media; we are sharing information with as many people as we can about the new uplift date for the recycle bins and that the local shop in Park Road has donated a substantial amount to help the most vulnerable.
Whilst maintaining social distancing rules, we have been making contact with others from garden gates and outside fences to make sure they have the right help and are in contact with the necessary people about medical needs, shopping and information.
The Chairperson of Ormiston West TRA, Mark Ormiston has been doing a regular walk around the village and the old railway tracks checking for fly tipping.
Our local Coalgate pub owners have had a great response to the food/ meals they have been supplying to help the isolated, elderly and also single parents with children. At present, they are doing this out of their own pocket even though they aren't allowed to trade. They have been a tremendous help serving up to 1,000 meals over the last three weeks with the help of local volunteers and using dishes that can be disposed safely to keep cross contamination at bay. Meals from the local pub were available from a ‘pick up point’ where food can be picked up and local drivers deliver them with masks and gloves, from Tuesday in Pathhead served from foresters or indeed delivered during the hours of 12-2pm. The Coalgate pub did the same on Wednesday for the Tranent, Ormiston and Pencaitland. They have also delivered essential shopping bags.
Fantastic work by our local community!' 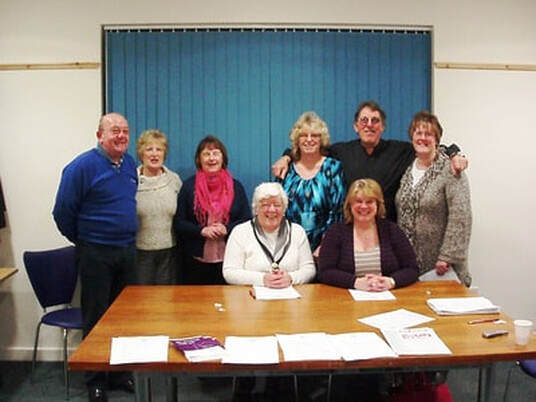 OWTRA have achieved so much over the years like the Mural for the play park, equipment for local school, street lighting, rubbish bins around local area, grit bins in local area, just to name a few achievements. Some of the aims for this year will be getting potholes fixed around the area, exploring options to resolve some of the transportation issues, addressing traffic speeding and attending the Estate Inspection.

We really need new people to come on board in order to help this long running Tenants and Residents group go forward and be a voice for their local community.

​​Update on projects achieved and projects currently working on.

'Recently, with the financial support from the Area Partnership, we had a play park for 10 years and under, constructed with great success at the west side of the village. We then thought of a mural on an 11m wall facing the play park, which thanks to the support from Walker Group is currently getting build in the village.

I knew an artist who would design the mural, and I approached the village primary school for any ideas. They suggested the 7 themes they use throughout the school. With a representative from Walker Group, I visited the school, and it was agreed to go ahead with those 7 themes. When we were in the meeting with the headmistress, I suggested the school needed a computer, and tents for outdoor activities. Walker Group agreed and they were delivered. A local builder was found to strip and plaster the wall. Even if I say so myself it looks great with the mural finished, and all agree.

Furthermore, through the Walker Group, we acquired three laptop computers for the local lunch club. In addition, we secured funding to upgrade an ancient right of way commonly known as the clarity loan. This would provide a further link from the north side to the south side, give an access to the shops, play parks and football ground. We organised school lighting as well as barriers to stop cars and motor bikes from using the path funded by the council.
An extra grit bin has been installed on a bad corner with the help of the council and we are currently working on calming measures on a blind corner.'

To find out about our meetings and what we do, contact our Chair:
Mark Ormiston
22 Park Road
Ormiston
EH35 5JS
Mark's Email